Christ The Saviour Church is a mission parish of the Antiochian Orthodox Christian Archdiocese of North America. We are a diverse community.  We have members who learned the Orthodox faith at an early age and those who discovered it as adults.  Services are in English.  Please take a look at the schedule of services and come visit us!

We come together as The Church to love and to worship God, and to joyfully live, celebrate, and proclaim the Gospel of Jesus Christ.  We serve one another, the community, and the world through heartfelt and reverent worship, fellowship, teaching, ministering, and outreach.

Fr. Anthony loves God and bringing healing, comfort, and joy to His people.  He is thankful to His Grace, Bishop Nicholas and the parish of Christ the Savior for allowing him to serve Christ the Savior while they await a full-time priest.
Fr. Anthony is married to Pani Matka Tina Marie and they have four children.  Fr. Anthony served as a parishioner, subdeacon, and deacon, at St. Nicholas in Charlottesville, VA (2001-2007), the rector of St. Michael in Woonsocket, RI (2007-2015), and as the rector of Pokrova in Allentown, PA (2015-2019).  He previously served the UOC-USA as a member of the Metropolitan Council (2013-2019) and the Consistory (2013-2019); and St. Sophia Seminary as the Vocation Director (2013-2019), Associate Academic Dean for Distance Learning (2014-2019), and as an adjunct professor (2007 - present).   He has a M.A. in Political Science form The Ohio State University (1996), an M.Div. from St. Sophia Seminary (2006), and is currently a full-time student at the University of Georgia (PhD, Political Science; MAT. Special Education & Dyslexia).  Fr. Anthony is a retired Military Intelligence Warrant Officer (USAR).  In his free time, he enjoys reading and playing role-playing, board, and card games with his family.  He has two active podcasts: Good Guys Wear Black (with Ancient Faith Radio) and OrthoAnalytika.  He alternates weekends serving Christ the Savior and Holy Resurrection in Waynesville, NC.
Our Bishop 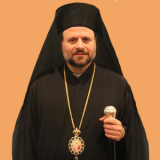 Bishop Nicholas was born in Damascus, Syria, in January 1963 to an Antiochian Orthodox family. He attended the French Lycée Laïque elementary and middle school, and the Omia High School. For the first 18 years of his life, he attended the Antiochian Orthodox Patriarchal Cathedral of the Dormition of the Virgin Mary in Damascus.
In February 1981, Bishop Nicholas emigrated to the United States, where he began a course of study at Northeastern University. He earned several degrees, including Bachelor of Science in Electrical and Computer Engineering, Master of Science in Computer Engineering, and a Specialization Certificate in Object-Oriented Design, Architecture, and Coding. Bishop Nicholas worked for nearly 20 years as a Computer Engineer at several companies in the Electronics Design Automation industry, such as ViewLogic Systems and Synopsys Co. He was also promoted to the highest technical ranks as a Lead Software Architect, Principal Software Engineer, and Software Engineering Manager. He represented his companies to many conferences in Sweden, France, England, Germany, Italy, and USA, and also served as a lecturer in Electronics Circuitry, Circuit Theory, and Digital Computers at the Wentworth Institute of Technology, Boston, MA.
Bishop Nicholas also holds a Master of Divinity degree, awarded with Highest Distinction, from studies undertaken between September 2002 to May 2005 at Holy Cross Greek Orthodox School of Theology in Brookline, Massachusetts. He speaks Arabic and English fluently. His second language in Syria was French, which he had used, along with Hebrew, Ancient Greek, New Testament Greek, and Modern Greek, to conduct research on theological subjects.
Bishop Nicholas was ordained to the Holy Diaconate by His Eminence Metropolitan Philip on April 23, 2004, and to the Holy Priesthood by His Grace Bishop Antoun on January 9, 2005. Upon graduating from Holy Cross Seminary, he was assigned by His Eminence Metropolitan Philip to St. Philip Antiochian Orthodox Church in Fort Lauderdale, Florida, where he served from August 2005 to December 2011. He was elevated to the dignity of Archimandrite by His Eminence Metropolitan Philip on February 14, 2010, and was consecrated to the bishopric as the Bishop of Brooklyn on December 11, 2011 at the Church of the Dormition of the Theotokos in the Patriarchal Monastery of Our Lady of Balamand, Balamand, Lebanon.
Bishop Nicholas has visited Mount Athos several times for contemplation and spiritual rejuvenation.
He served as Bishop of New York & Washington D.C. and as Assistant of Metropolitan Joseph until August of 2017 when, following the retirement of Bishop Antoun, he became the Bishop of Miami and the Southeast.  We are blessed to have him as our archpastor; Many Blessed Years, Sayidna Nicholas!
Bishop Nicholas meets with his flock every Sunday afternoon via BAND: https://band.us/band/79085310
Powered by Orthodox Web Solutions
Home | Back | Print | Top