The Orthodox Church was founded by our Lord Jesus Christ and is the living manifestation of His presence in the history of mankind. The Orthodox Church is evangelical, but not Protestant. It is Orthodox, but not Jewish. It is Catholic, but not Roman. It isn’t non-denominational – it is pre-denominational. It has believed, taught, preserved, defended and died for the Faith of the Apostles since the Day of Pentecost over 2000 years ago. The Church celebrates the memory of St. Raphael of Brooklyn on February 27. Rafla Havavini (name of a saint in the world) was born in 1860 in Damascus (Syria) into a pious believing family. Educated at a local Orthodox school and seminary on about. Chalki in Greece (1886). Obeyed by Patriarch Gerasim II of Antioch in Damascus. In 1878 he was tonsured a monk and ordained a deacon. Since 1888 he continued his education at the Kiev theological schools. In 1889 he became a priest and was elevated to the rank of archimandrite. Then for 5 years he is obedient to the abbot of the Church of Antioch in Moscow. From 1894 to 1895, he taught at the Kazan Theological Academy. The American period in the life of St. Raphael began in 1895. In the 1890s. Arab-speaking Orthodox Middle Easterners living in New York formed the Syrian Charitable Association. At that time, the Church on the American continent was ruled by the clergy of the Russian Orthodox Church. The members of the association asked to appoint a spiritual father for them, who would speak and serve in their language. The choice fell on Father Raphael. In 1895 he came to the United States and was appointed mentor to the Syro-Arab believers. In 1904, priest Raphael was elected vicar bishop of the Aleutian diocese with the title of "Brooklyn". The episcopal consecration of Father Raphael was headed by Bishop Tikhon (Bellavin), the future Patriarch of Moscow. The ordination took place at the Nicholas Cathedral in Brooklyn, founded by Archimandrite Raphael. Vladyka Raphael was an educator with extensive experience in this area, who had serious theological training and knew the Russian and Syro-Arabic languages. He was a supporter of the introduction among his flock of the English language as a liturgical and educational language for the more fruitful development of the Syro-Arab mission. This was due to the fact that the younger generation of Syrians studied in American schools and stopped going to Orthodox churches. Towards the end of 1912, from incessant labors, the saint fell ill. Doctors diagnosed heart failure. Bishop Raphael passed away in 1915 after a long illness. At that time, through his labors, the Antioch mission numbered 30 communities with 25 thousand parishioners. The canonization and glorification of the saint took place in 2000. A solemn divine service took place in the Tikhonov Monastery of the Orthodox Church in America. In 2015, ROCOR widely celebrated the 100th anniversary of the repose of St. Raphael of Brooklyn. As part of the celebrations, a particle of the relics of St. Raphael. 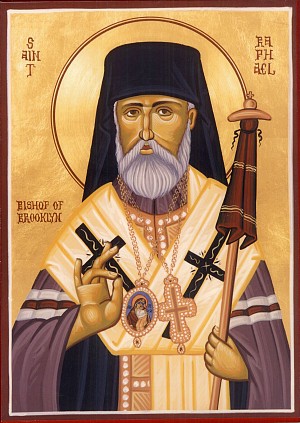 Rejoice, O Father Raphael, adornment of the holy Church! Thou art champion of the True Faith, seeker of the lost, consolation of the oppressed, father to orphans and friend of the poor, peacemaker and good shepherd, joy of all the Orthodox, son of Antioch, boast of America. Intercede with Christ God for us and for all who honor thee.